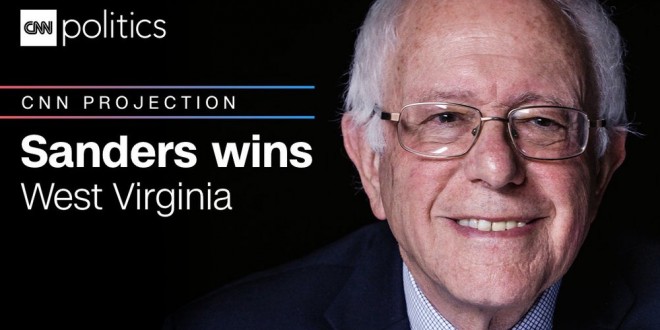 Bernie Sanders has been declared the winner of the West Virginia primary. At this writing it appears that he will take 14 of the 24 Democratic delegates up for grabs. According to exit polls, nearly half of Sanders’ supporters say they will vote for Trump in the general election should he not win the Democratic election. Just in from the Sanders campaign:

We just got word that we won our 19th state, taking the majority of the delegates in today’s primary in West Virginia.

Every vote we earn and every delegate we secure sends an unmistakable message about the values we share, the country’s support for the ideas of our campaign, and a rejection of Donald Trump and his values.

Now we’re on to two more primaries next week in Kentucky and Oregon, where we also hope to do very well. So let’s keep going.

Add a $2.70 contribution to our campaign and DFA and we can win Kentucky and Oregon next week and send a powerful message that we’ll fight for our values all the way up to the Democratic convention.

There is nothing I would like more than to take on and defeat Donald Trump, someone who must never become president of this country. But I believe that it is not enough to just reject Trump – this is an opportunity to define a progressive vision for America. Voters agree: just today, three new polls showed that we are the best campaign to defeat Trump.

We fully acknowledge we have an uphill climb ahead of us, but we’re used to that. We have been fighting uphill from the day this campaign began, and we’re going to stay in the race until the last vote is cast. And with your help, I hope to take on Trump, too. Thank you for standing with me.