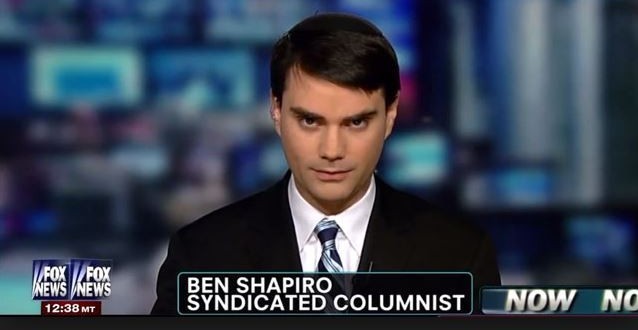 That Donald Trump is a god to racists, skinheads, neo-Nazis, and anti-Semites is hardly news to anybody with an internet connection, but it IS interesting that the penny has finally dropped for Ben Shapiro. He writes at the National Review:

I was wrong. I’ve spent most of my career arguing that anti-Semitism in the United States is almost entirely a product of the political Left. I’ve traveled across the country from Iowa to Texas; I’ve rarely seen an iota of true anti-Semitism. I’ve sensed far more anti-Jewish animus from leftist college students at the University of California, Los Angeles, than from churches in Valencia.

As an observer of President Obama’s thoroughgoing anti-Israel administration, I could easily link the anti-Semitism of the Left to its disdain for both Biblical morality and Israeli success over its primary Islamist adversaries. The anti-Semitism I’d heard about from my grandparents — the country-club anti-Semitism, the alleged white-supremacist leanings of rednecks from the backwoods — was a figment of the imagination, I figured.

I figured wrong. Donald Trump’s nomination has drawn anti-Semites from the woodwork. I’ve experienced more pure, unadulterated anti-Semitism since coming out against Trump’s candidacy than at any other time in my political career. Trump supporters have threatened me and other Jews who hold my viewpoint. They’ve blown up my e-mail inbox with anti-Semitic conspiracy theories. They greeted the birth of my second child by calling for me, my wife, and two children to be thrown into a gas chamber. Yes, seriously.

And that’s just the opening. Hit the link for the rest. Breitbart, unsurprisingly, was unable to resist attacking the messenger, who is, after all, a traitor that used to work for them.

BREAKING: Breitbart News loses what was left of their Trump-addled minds pic.twitter.com/DIexbtZTwa