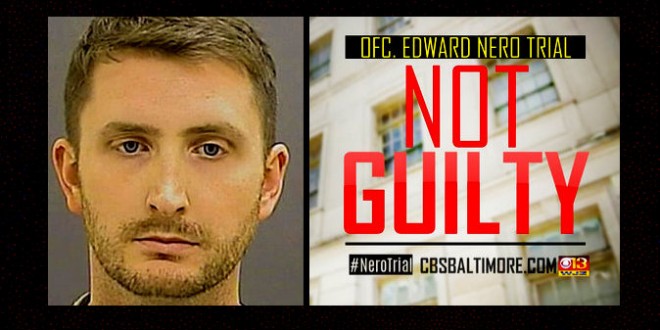 BALTIMORE: Cop Found Not Guilty On All Charges In Freddie Gray Case That Spurred Civil Unrest

Nero waived his right to a trial by jury. His bench trial began May 12 and final arguments were heard Thursday.

WJZ’s Ron Matz says the trial was attended by a group of Baltimore City police officers, most in plain clothes. After the verdict was read, they came up to Nero one by one, embracing him and slapping him on the back. Nero was seen with tears in his eyes.

From the Baltimore Sun:

Nero was the second of six city police officers charged in the case to stand trial. The first trial, of Officer William Porter, ended in a hung jury and mistrial last December.

Nero, a former New Jersey volunteer firefighter who joined the Baltimore Police Department in 2012, is one of three officers who were on bike patrol when they chased and arrested Gray in West Baltimore.

Gray, 25, suffered severe spinal cord injuries while in the back of a Baltimore police van, prosecutors say. He died a week later, touching off citywide protests. On the day of his funeral on April 27, rioting, looting and arson broke out, leading the mayor to institute a weeklong nightly curfew and the governor to call in the National Guard.