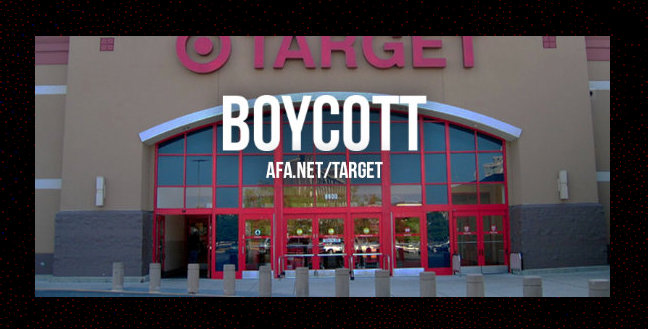 Via press release from the American Family Association:

On a media call last, week Target CEO Brian Cornell was asked if the boycott had an effect on their sales or stock price. He responded by saying “To date we have not seen a material or measurable impact on our business. Just a handful of stores across the country have seen some activity and have been impacted.”

Did you hear that? When asked about over 1.25 million people who are boycotting his store he shrugs it off and uses the word “handful.” Don’t let Target’s arrogance fool you. We are having an impact and the boycott is making a difference.

Since we launched the Boycott Target Pledge April 21, over 1.25 million people have signed on. Another interesting fact, Target has remained silent on Facebook and Twitter. The most recent post on Target’s Facebook page came April 23, and their Twitter has been silent since April 19.

According to Breitbart News “Target’s stock has fallen 20 percent – from $84 per share to $67 per share – since it imposed the pro-transgender policy on its customer base of families. That loss has chopped roughly $10 billion from the overall shareholder value of the company, according to a chart produced by Yahoo.com.”

In comparison to other major retailers, Target’s stock has dropped three and four times more than the stock of its competitors. While there are many factors at play in the stock market, we do believe the boycott has played a role in the company’s public image and ultimate stock fall the past four weeks.

I say all of that to say this; your efforts are making an impact. Urge everyone you know to sell their Target Stock.