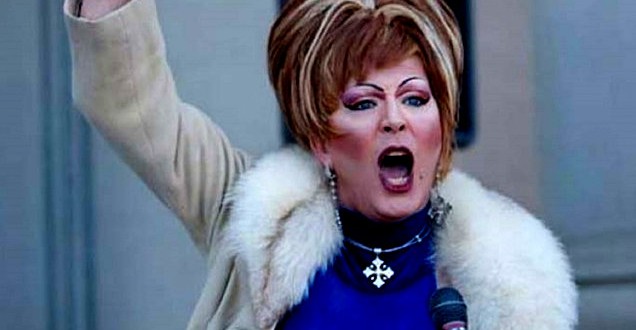 Most expect currently suspended Alabama Supreme Court Chief Justice Roy Moore to run for governor in 2018 if the SPLC’s ethics complaint results in his being booted from the bench for a second time. Moore’s archenemy, local drag star Ambrosia Starling, yesterday revealed that she just might challenge him for the governor’s mansion. From the Huffington Post:

Starling, who publicly only uses her drag name (and female pronoun) for fear of putting her family at risk of harm in conservative, rural Alabama, says she may run for governor in 2018, particularly if Moore seeks to use the controversy to run for governor again. Moore made gubernatorial runs in 2006 and 2011, losing in the GOP primary both times.

After entertaining a presidential run in 2011, he decided to run for the Chief Justice to the Alabama Supreme Court in 2012 — which he’d been famously removed from once before, in 2003, for failing to remove a Ten Commandments monument from the court rotunda — and won.

“He’s going to run again for governor,” Starling said, noting that he’ll use the backlash against marriage equality and the activism it has spurred as a springboard to gain support among conservatives. “Be very sure and understand this. I told the group at [a] rally, ‘It’s very possible I’m handing Roy Moore the governorship on a silver platter.’” And if Moore does run, he may find Starling as his opponent, running as an independent and in drag — and legally changing her name to her drag name, again to protect her family, she said.

“When the idea was first thrown at me to run for office in the state of Alabama, at first I laughed,” Starling recalled. “And then I said, ‘Well wouldn’t that be something? That it finally takes a drag queen to straighten out the circus of politics’ If it takes a drag queen to get everyone to face the front, same direction, and listening, I’ll do that.”