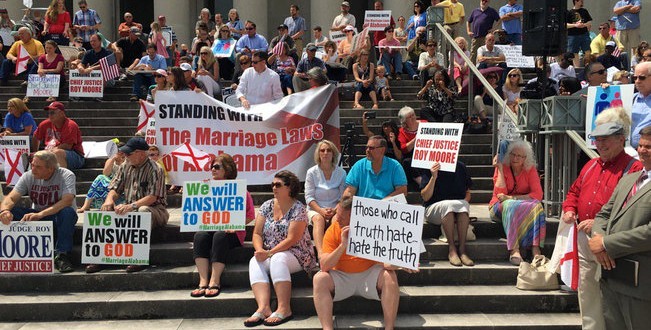 Sanctity Of Marriage Alabama and World Net Daily predicted that “thousands” would rally for Roy Moore yesterday. Not quite. Via Al.com:

Supporters of suspended Alabama Supreme Court Chief Justice Roy Moore called for his reinstatement today at a rally at the state judicial building in Montgomery.

Speakers led prayers and urged those at the rally to sign an online petition supporting Moore and calling the ethics charges filed by the Judicial Inquiry Commission a “politically-motivated travesty.”

Kayla Moore told the crowd that her husband, Chief Justice Moore, did not attend because he did not want the rally to be about him.

“It’s about freedom,” Kayla Moore said. “It’s about religious freedom and our constitution.”