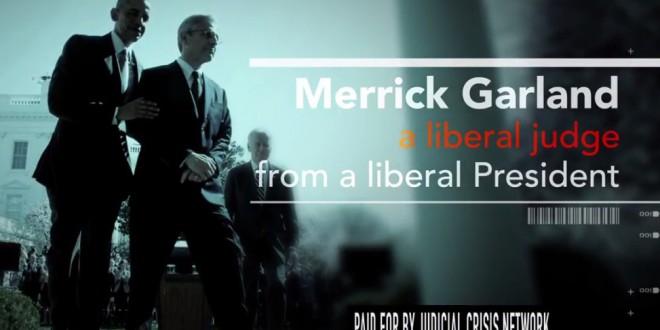 A deep-pocketed conservative advocacy group opposing Merrick Garland is spending a half-million dollars in five states for a new ad proclaiming that the Supreme Court nominee is “no moderate” — the latest phase of its pricey anti-Garland campaign.

The ad from Judicial Crisis Network will start running on TV and online Friday in West Virginia, Colorado, North Dakota, Iowa and New Hampshire. It’s intended to pressure Democratic senators and candidates against Garland by casting the jurist as a solid liberal who would transform the Supreme Court.

The new buy from the conservative group, which had already spent $4 million on the court fight, comes as senators head home for a weeklong recess.

Prior to Obama’s election in 2008, the Judicial Crisis Network was known as the Judicial Confirmation Network. That tells you everything you need to know about them.