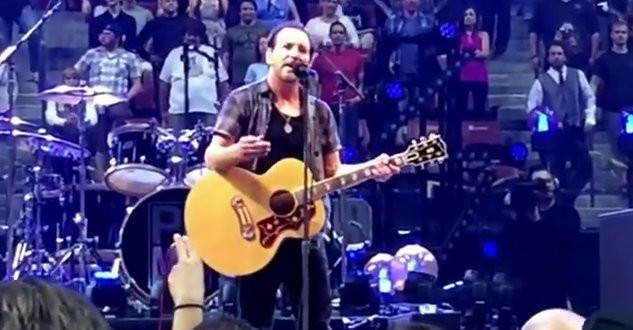 VIRGINIA: Pearl Jam Dedicates I Am A Patriot Song To “Soldiers In The LGBT Community” [VIDEO]

“We thought we could take the money and give it to them and still play the show, but the reality is there is nothing like the immense power of boycotting and putting a strain,” Vedder said, “and it’s a shame because people are going to affected that don’t deserve it but it could be the way that ultimately is gonna affect change, so again, we just couldn’t find it in ourselves in good conscience to cross a picket line when there was a movement so…”

Pearl Jam dedicated the first song of the encore, a cover of Steven Van Zandt’s “I Am a Patriot,” to the “soldiers in the LGBT community.” Van Zandt, along with Bruce Springsteen and the E Street Band, similarly canceled their Greensboro, North Carolina concert earlier this month to protest HB2.