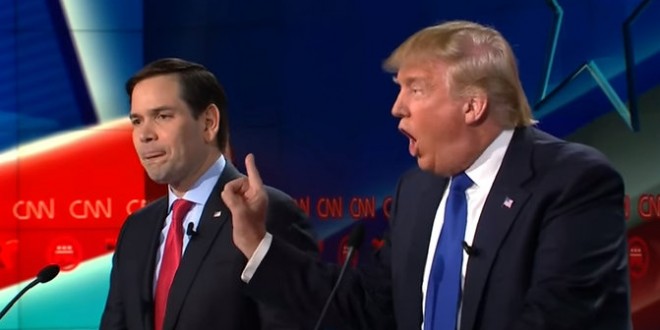 Trump: I’d Love To Have Marco Rubio In My Cabinet

Donald Trump spent much of the last six months mocking “Little Marco” Rubio and calling for him to resign over missed Senate votes. And now this:

Donald Trump on Thursday said that he would welcome Sen. Marco Rubio (R-Fla.) into his presidential cabinet. “Frankly, Marco I’d love to have involved,” the GOP presidential front-runner said on Fox News’s “Hannity.”

“I can tell you that Ben Carson is a terrific guy,” Trump said, listing other options from the original GOP contenders. “Chris Christie is a fantastic guy. Both of them are tremendous people.

“The party has to unite. If we unite, this party is going to have a huge victory. We are going to win places other people have no chance of winning.”

Ted Cruz has also floated Rubio has a running mate.