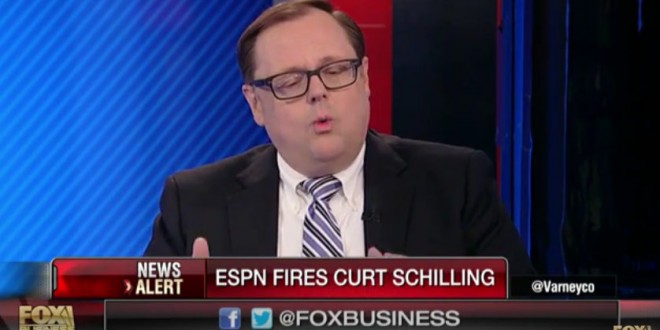 “Unless you conform to ESPN’s radical cultural agenda, you’re a narrow minded, judgmental, unloving, racist bigot – not worthy of death – just unworthy to be gainfully employed. But I suspect an overwhelming majority of Americans agree with Schilling’s perspective on transgender bathrooms. Many moms and dads sincerely do not want their young daughters sharing a bathroom or a locker room with boys or men.

“Will ESPN publicly advocate for professional sports to transform stadium bathrooms into gender-neutral facilities – to accommodate the cultural whims of every ze, zir and them? It’s a very unusual time to be an American, folks. We’ve reached a point where choosing a bathroom based on your God-given plumbing makes you a transphobic bigot. Traditional values just got double-flushed. Schilling has learned a very important lesson – free speech comes with a price. And those who dare defend traditional values — will be silenced.” – Todd Starnes, writing for Fox News.

In the clip below, the Fox host gets Starnes to agree that ESPN had the right to fire Schilling.

Previous Bad Lip Reading At The Democratic Debate [VIDEO]
Next NBA To North Carolina: Repeal Your Anti-LGBT Law Or Charlotte Will Definitely Lose The All-Star Game