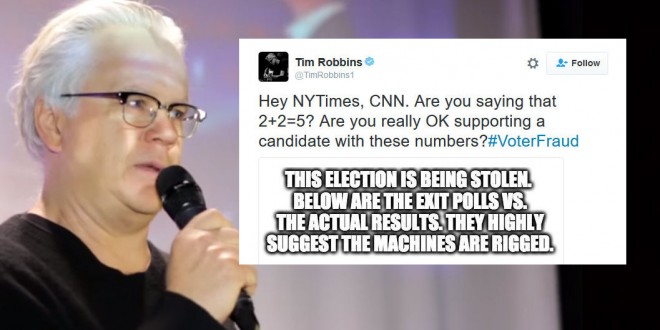 Actor Tim Robbins, who is one of Bernie Sanders’ most passionate supporters, today issued a tweet which appears to accuse the media of collaborating with the Clinton campaign to steal the election. As evidence of this collusion, Robbins attached a meme which compares exit polling with actual voting results. Which proves the machines are “rigged.” Robbins then attacked those that questioned his claim by accusing them of being on the payroll of the pro-Clinton super PAC, Correct The Record.

Hey NYTimes, CNN. Are you saying that 2+2=5? Are you really OK supporting a candidate with these numbers?#VoterFraud pic.twitter.com/LrxqLTaKbC