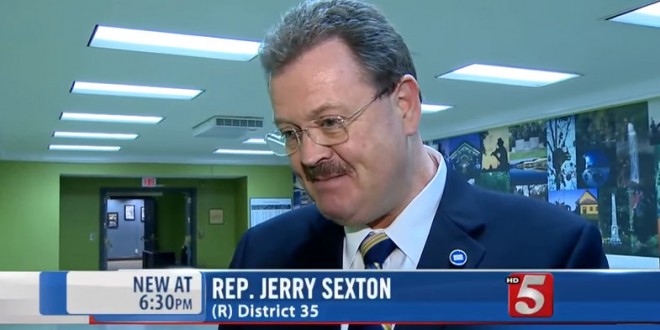 Last year Tennessee state Rep. Jerry Sexton failed in his attempt to make the Christian bible the official state book. But the bill has been revived and calendared for a vote today by the state Senate. Here’s what happened last week:

A contentious bill seeking to declare the Holy Bible the official book of Tennessee is headed back for a vote in the full state Senate. The measure narrowly passed the House last year, but the Senate sent it back to committee amid constitutional concerns raised by the state attorney general.

Republican Sen. Steve Southerland of Morristown revived the measure Tuesday, and it cleared the Senate Judiciary Committee on a 7-1 vote. Southerland said it is aimed at highlighting the historical significance of the Bible in Tennessee, not as an official endorsement of a religion.

Opponents like Republican Senate Speaker Ron Ramsey of Blountville last year argued that the Bible is far too sacred to be trivialized by being placed alongside other official symbols like the state fruit, amphibian or rock.

The editorial board of The Tennessean has published a blistering statement in opposition:

This is Tennessee, not Tehran. We are governed by the people, not the religious authorities. If legislators truly care about religious liberty, they would vote against an ill-advised effort to endorse the Holy Bible as the official state book.

However, the theocrats in the Tennessee General Assembly have a good shot at getting their way. The House passed the Bible bill last year, but the Senate wisely passed on it. This year, however, there might be enough votes in the Senate to approve it.

This, despite Attorney General Herbert Slatery’s warning last year that such a bill could be ruled to be unconstitutional. Political leaders like Gov. Bill Haslam, Senate Speaker Ron Ramsey and Senate Majority Leader Mark Norris are not on board.

“It’s fundamentally wrong. I think it’s sacrilegious,” Norris said. But in an election year, in which the base is bucking the establishment, their opinions may not matter. Lawmakers who support it are acting like the ayatollahs of the Legislature, dictating what beliefs are acceptable and making Tennessee a laughingstock.

I would suggest the newspaper’s editorial board would have a valid point – if in fact the lawmakers were beheading people and throwing citizens off buildings and torturing ministers. But they are not.

The move to make the Bible the official state book is akin to a state having an official vegetable or an official snack. In other words, the Bible bill would have no discernable impact on people’s daily lives. There will be no forced conversions or baptisms in the Volunteer State.

Lawmakers should be commended for their efforts to honor the Holy Bible. We are, after all, one nation under God. So why not recognize His book? But imagine what kind of a nation we would be if folks went one step further – and decided to live by the teachings of the Good Book.

By the way — Tennessee’s official state beverage is milk — I wonder if The Tennessean is going to accuse lawmakers of attacking lactose intolerant people?

Previous Electoral College Prediction On Clinton Vs Trump
Next GOP Continues Campaign On Thwarting Donald Trump: Why Live Under Rules Of Past Conventions? [VIDEO]