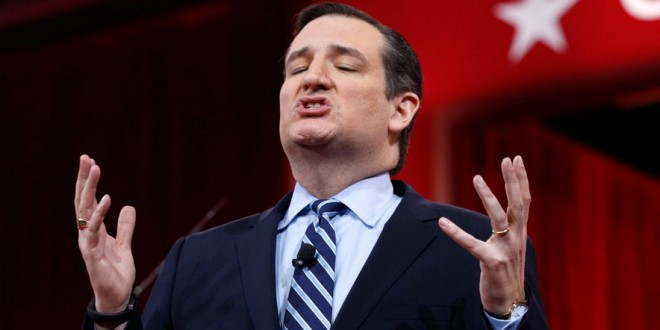 The Hill: Even His Supporters Loathe Ted Cruz

In the post below this one, Politico expounds on why Ted Cruz is so universally disliked, even by those who support his campaign. Similarly fueled by yesterday’s comments by John Boehner, The Hill today weighs in with a blistering take on the same topic. An excerpt:

In the past eight years, no one has captivated the realistic hopes of conservative constitutionalists the way that Cruz has in this election. On every single issue of importance to conservatives, Cruz is right. He is a walking, living, breathing Supreme Court dissent, masterfully articulated and extensively annotated on paper.

Then, he opens his mouth. And people scream. They run for the exits as if their hair is on fire. They want to take a shower.

Cruz may entertain himself by impersonating characters from “The Simpsons,” but it is hard to get out of your mind that Cruz just might, in fact, be Mr. Burns, with those evil snake eyes and the sharp, downward curved beak. Heartless, robotic, ever-calculating, willing to do anything to maximize profits at his nuclear power plant.

“Who is that firebrand, Smithers?” you can almost hear Cruz inquire of a top campaign staffer as he suspiciously eyes Trump and taps his fingertips together. Or, maybe he is the unholy spawn of Count Dracula and “The Penguin” from Batman. So, what, exactly, is the problem with Cruz? Why is he so terrible?

For starters, his face and natural demeanor appear bionically opposed to a sunny disposition. The forced smiles only make him look more demonic. And because his facial contortions are so clearly faked, he always looks like he must be lying. “Lyin’ Ted,” you might say.