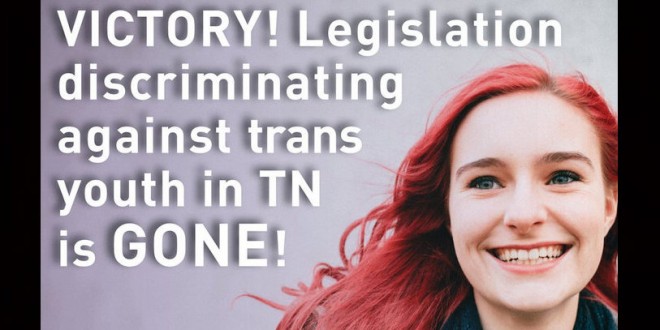 The House sponsor of a controversial bill that would require students in public school grades K-12 and higher education institutions to use the restroom that corresponds with their sex at birth is delaying action on the bill until next year.

Rep. Susan Lynn, R-Mt. Juliet, told The Tennessean on Monday that she plans on effectively killing her own bill with the purpose of studying the issue further.

“I have learned that our school districts are largely following what the bill says,” she said. “I am still absolutely 100 percent in support of maintaining the privacy of all students. But I’m going to roll the bill over until next year so we can work on those issues.”

The announcement comes as competing groups descended on Capitol Hill on Monday to continue the battle over the bill, while a panel of senators delayed taking action on the controversial legislation

On Monday about 30 pastors from the conservative Tennessee Pastors Network joined the head of the Family Action Council of Tennessee at the state Capitol to show support for the controversial bill.

Around the same time, two transgender high school students — Henry Seaton and Jennifer Guenst — headed to Gov. Bill Haslam’s office to deliver more than 67,000 signatures from Tennesseans, including nearly 6,000 people who identified as clergy or people of faith, who are opposed to the measure.

One of the bill’s main backers is Alliance Defending Freedom. (Tipped by JMG reader Rick)

THANK YOU to everyone who stood up and spoke out against #transgender discrimination in Tennessee! pic.twitter.com/MehMMMBpMw