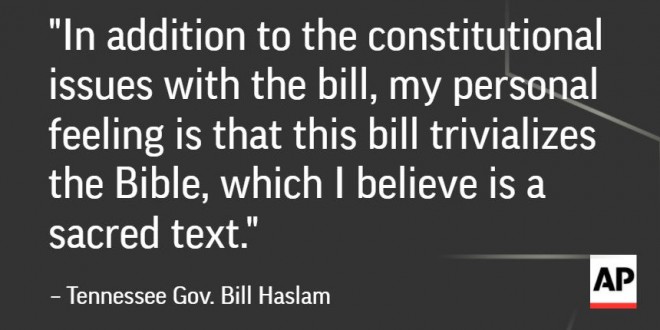 Republican Gov. Bill Haslam on Thursday vetoed a bill seeking to make Tennessee the first state to designate the Bible as its official book.

Haslam, who considered entering a seminary before deciding to join the family truck stop business after college, said in his veto message that the bill “trivializes the Bible, which I believe is a sacred text.”

The bill had narrowly passed both chambers of the Tennessee General Assembly after sponsors said it aimed at honoring the significance of the Bible in the state’s history and economy, as opposed to a government endorsement of religion.

“If we believe that the Bible is the word of God, then we shouldn’t be recognizing it only as a book of historical and economic significance,” Haslam said.

The bill is sponsored by Sen. Steve Southerland, an ordained minister, and Rep. Jerry Sexton, a retired Baptist pastor. Both are Republicans from eastern Tennessee. Both are vowing to mount bids to override Haslam’s veto next week.

It only takes a majority in both chambers of the Tennessee General Assembly to override the veto. Haslam has previously vetoed three bills since taking office in 2011, and none has been turned back by lawmakers.