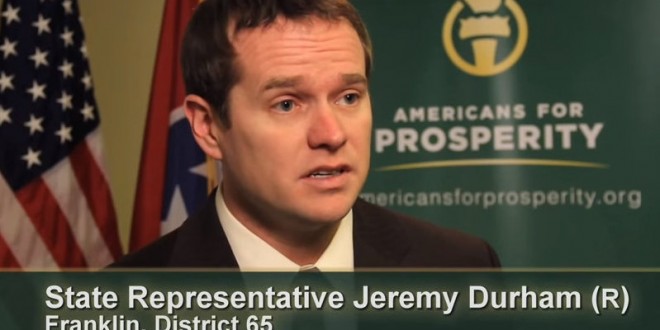 Tomorrow the Tennessee House Finance Committee is scheduled to hear a bill that bans public schools and universities from allowing trans students to use restrooms that align with their gender identity. As it turns out, one of the bill’s GOP co-sponsors is an ACTUAL real life danger to women according to his own party.  CBS News reports:

A Tennessee lawmaker is effectively being quarantined from lawmakers, lobbyists and interns after the state’s attorney general determined that he could pose a risk to “unsuspecting women” at the state Capitol complex.

House Speaker Beth Harwell announced Thursday that she is moving Rep. Jeremy Durham’s office to the ground floor of a building across the street and that his access to committee rooms and the House chamber will be limited to when meetings are taking place. The move comes amid a state attorney general’s investigation into the Franklin Republican’s “pattern of conduct” toward women.

Interviews with 34 current and former lawmakers, lobbyists, staffers and interns included allegations that Durham made sexual comments and inappropriate physical contact with women working at Legislative Plaza, according to Attorney General Herbert Slatery’s memorandum to Harwell.

Slatery recommended that the House take action to avoid a hostile work environment at the Capitol complex. “Representative Durham’s alleged behavior may pose a continuing risk to unsuspecting women who are employed by or interact with the Legislature,” Slatery said in the memo.

Prosecutors in 2014 sought fraud charges against Durham on allegations of altering medical prescriptions, but a grand jury declined to indict the lawmaker.

Today Tennessee Attorney General Herbert Slatery warned that the state may lose millions in federal funding if the bill passes.

The opinion was made public today even as gay rights advocates today sought to amp up pressure on Tennessee Republican lawmakers and the country music industry by calling on major label chiefs to “step up and demand” bills targeting the LGBT community be scratched.

In his response to questions posed by two House members – one a Republican and the other a Democrat – Slatery said the bathroom bill, which would require students use bathrooms based on their gender at birth, said the measure risks been seen as violating Title IX of the federal Education Amendments of 1972.

“If, if only because the U.S. Department of Education, which is charged with enforcing Title IX, interprets Title IX to require that transgender students be access to restrooms and locker rooms consistent with their ‘gender identity’ instead of their anatomical gender,” the state’s top lawyer wrote in the opinion.

Slatery also said if House Bill 2414 is enacted, a public school or colleges that “implements that law will be putting its Title IX funding at risk, because a receipient of federal funding that discriminates in violation of Title IX may lose its federal funding.”