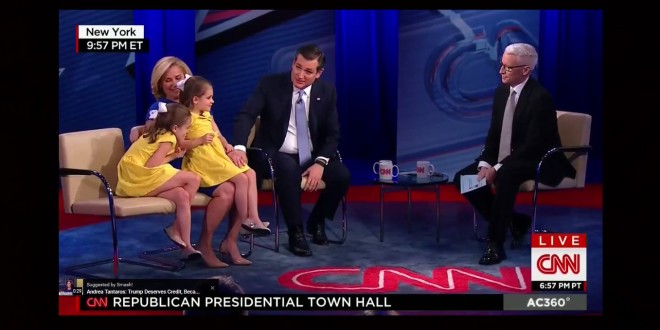 Kids of presidential candidates say the darnedest things, like that video exists of their father sporting a pink boa and comical underwear, and that said video will be distributed to parents of their classmates.

Take, for instance, 8-year-old Caroline Cruz, who said as much Wednesday during a town hall with her dad on CNN.  Joined by his family for the special, Ted Cruz spoke jokingly about “the moments of humility” that he’s experienced fathering two girls.

“Indeed, just a couple of days ago I was back for Caroline’s daddy-daughter picnic at school, which featured all the dads running and playing games,” Cruz said.

“My favorite,” Caroline said. “Your favorite was that she got to dress up daddy in, like, this pink boa,” Cruz continued, “and these, like, big goofy-looking underwear—”

“That was on a videotape the whole time,” Caroline said. The audience laughed. “Uh oh,” said Cruz, throwing up his hands. “And now it’s a class video that they’re sending out to all the parents,” Caroline said.

USA Today ends the above-linked article by asking for a copy of the clip.