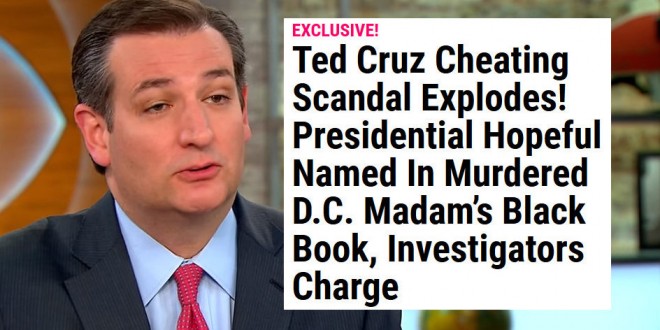 Embattled White House candidate Ted Cruz‘s cheating scandal is set to explode wide-open, with fresh — and blockbuster — allegations that the married conservative senator was named in the black book of a notorious Washington D.C. madam who mysteriously died, RadarOnline.com has learned.

Montgomery Blair Sibley, a former lawyer for madam Deborah Palfrey, has filed a dramatic appeal to the U.S. Supreme Court for permission to publish her unconventional “black book,” which consists of some 15,000 pages of phone records and calls to clients, as well as their calls requesting the $300-an-hour services from her gaggle of beautiful hookers!

But Radar has learned The National ENQUIRER will this week report its findings of yet another exhaustive and investigative probe that will quote journalist detectives who claim the mystery candidate almost certainly “has to be Cruz.”

Investigator Wayne Madsen, who was on a team of reporters hired by Hustler Magazine’s boisterous owner Larry Flynt to investigate the madam, told The ENQUIRER that Cruz should be concerned! “If Montgomery Sibley has what he says he has, it has to be Cruz,” he said in an interview — an advance copy of which was provided to Radar.

Ted Cruz has finally denied cheating on his wife – at the same time as his phone number is alleged to be in the ‘Black Book’ used by the notorious DC Madam. The Republican presidential candidate’s digits are reportedly be included in 15,000 pages of phone records dating back two decades.

The allegations come after Cruz was accused of cheating on his wife Heidi and having had five ‘mistresses’. He has called the claims ‘complete garbage’ but declined to say that he had never cheated on his wife, until on Monday when he told Fox News: ‘I have always been faithful to my wife.’

However Cruz married Heidi in 2001 and some of the numbers in the DC Madam’s Black Book date back to the mid 1990s when he was working his way up in politics. Cruz has made his evangelical faith a central plank of his campaign and contrasted his family values to those of Donald Trump, who is leading the polls among Republicans.

“Almost certainly” is hardly proof and even if the claims do bear out, it’s likely Cruz was unmarried at the time. But as you can see below, pro-Trump Teabagistan has already decided the story is true.