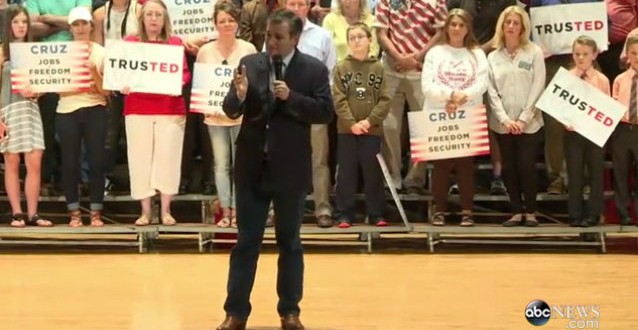 Ted Cruz: If Donald Trump Dresses Up Like Hillary Clinton He Still Can’t Use The Girls’ Bathroom [VIDEO]

Ted Cruz is not backing down from criticizing rival Donald Trump for his comments about North Carolina’s controversial bathroom bill. The Texas senator sought to further condemn the real estate mogul at an event Sunday for his opposition to a law that segregates bathrooms by biological sex. “If Donald Trump dresses up as Hillary Clinton, he still can’t go to the girls’ bathroom,” Cruz quipped. Trump said Thursday that North Carolina is “paying a big price” for the law, which supporters of LGBT rights see as discriminatory toward transgender people. Trump said transgender people should use whatever bathroom they want.

WATCH: @tedcruz: “If Donald Trump dresses up as Hillary Clinton, he still can’t go to the girl’s bathroom.”https://t.co/RYB8iZlVDN

Previous Hillary To Charles Koch: Not Interested In Your Support
Next Target Boycott Petition Nears 500,000 Names