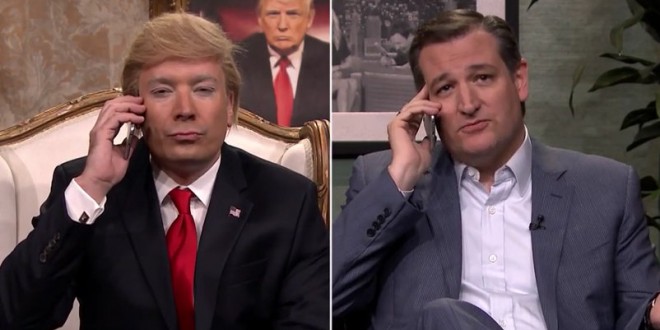 Ted Cruz made an appearance on The Tonight Show this evening and took a phone call from Jimmy Fallon‘s Donald Trump. Cruz clearly seemed very disinterested in all the advice Trump was giving him. Trump confronted him on supposedly stealing Colorado. Cruz patiently explained the system, and Trump suggested that maybe “the people were so high they completely forgot” to vote. Trump also confronted Cruz on his “New York Values” slam. Cruz joked a bit about what he meant and did some tongue-in-cheek NYC pandering. At one point, Cruz just gave up on trying to talk to Trump and reached for some liquid nourishment instead.

Previous This Is An Ad For Something [VIDEO]
Next NORTH CAROLINA: Duran Duran To Promote “Ugly Bigoted HB2” Repeal At Tomorrow’s Charlotte Concert