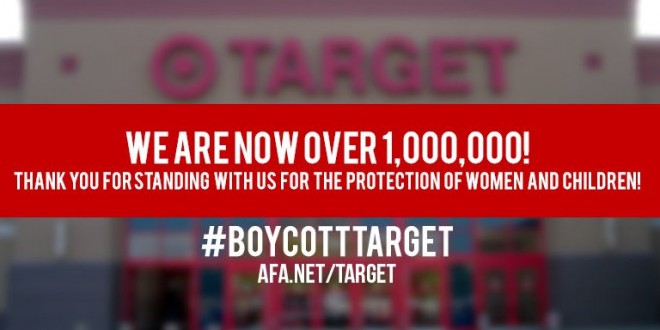 More than 1,000,000 people have signed the boycott pledge against Target, following the secretive decision by executives to open all of their stores’ bathrooms and changing rooms to people of both sexes.

Late Thursday night, roughly 75 people a minute were adding their name to the petition as it clicked over 1 million, just after 10:30 pm Eastern Time.

“That’s a million families who are going to spread the word about Target, so they may not get those customers back,” or their money, said Tim Wildmon, president of the American Family Association, which has hosted the boycott.

Target’s “management is just going to have step up here [and] say ‘We’re selling hammers and hats, we’re not into social engineering,’” he said.

The company’s Twitter, however, has been very inactive. The most recent tweet was sent out April 19, even tough the company has been sending out a tweet every two or three days in the first half of April.

On Tuesday the company told USA Today that it “firmly stands” behind its transgender policy.

UPDATE: Breitbart managed to omit this tidbit from the AFA’s statement: “We want to make it very clear that the AFA does not believe the transgender community poses this danger to the wider public. Rather, this misguided and reckless policy provides a possible gateway for predators who are out there.”