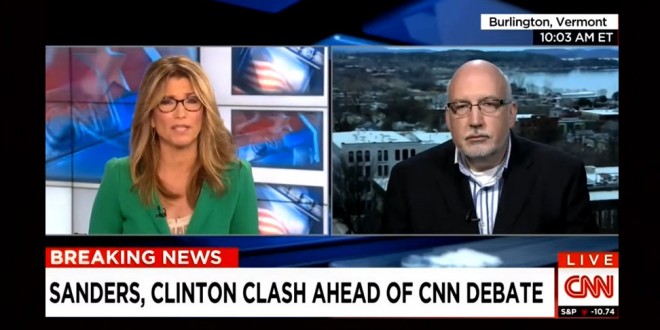 Well, this might be a tough one to walk back. In the aftermath of a feud that started when Bernie Sanders thought he heard Hillary Clinton say he was “quote-unquote not qualified to be president,” Sanders campaign manager Jeff Weaver isn’t just doubling down on the attack, he’s flipping over the table and slapping the pit boss. In an interview with CNN’s Carol Costello Thursday morning, Weaver stood by the Senator’s “not qualified” attacks on Hillary Clinton, and added a new item to the list that Sanders ticked off last night: the rise and expansion of ISIS. Yes, that happened.

“I think if you look at her record and campaign, her campaign is funded by millions and millions of dollars from Wall Street and other special interests. She’s made a deal with the devil, and we all know the devil wants his money in the end. So that’s the kind of campaign she’s running. She supported the terrible trade deals which have devastated American manufacturing in the country. She supported the war in Iraq. She continues to have a very, very hawkish foreign policy that has led to the rise and expansion of ISIS throughout the Middle East.”