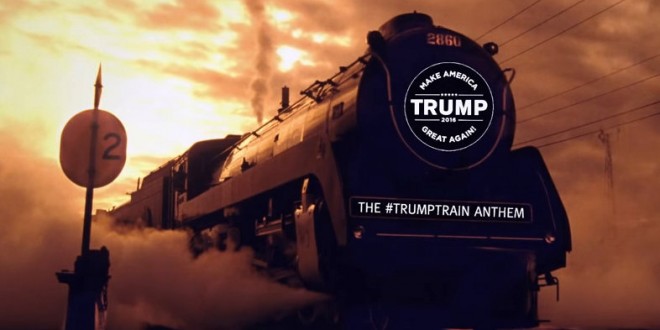 Donald Trump has tweeted out a fan-made video set to the 1996 Miami bass hit C’mon N’ Ride It by Quad City DJs. Seriously. Mediaite has more:

The video is well worth a watch all the way to the end, if for no other reason than to spot your favorite Trump surrogates from the 2016 campaign: Katrina Pierson. Diamond and Silk. Even that Hispanic woman from October who screamed, “Yes, Mr. Trump! We love you! We love you, all the way to the White House!” They all make an appearance in the video, which seems to have been originally edited by a fan on Twitter identified as Mark F. (@Immigrant4Trump), whose personal social media feed reads like Trump standing of Fifth Avenue while shouting messages of support at every imaginable demographic. Despite the fact that the song includes the word “train” 28 times, the video is interspersed with countless images of Trump’s plane. It’s an incredibly patriotic piece of art that includes a smash cut of fireworks, the American flag, and a bald eagle dramatically flipping its head to its left.