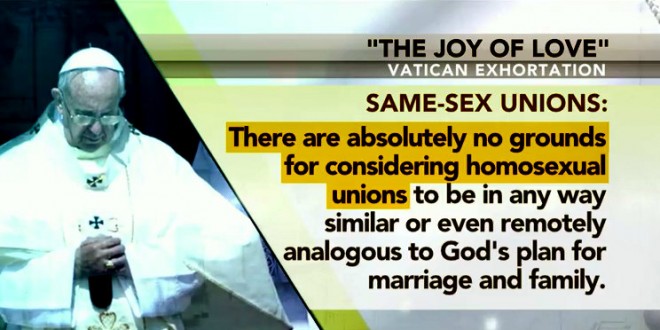 Pope Francis put his shoulder to the doors of the Catholic Church and shoved them open a little wider Friday, calling for the church to be more tolerant in practice, while not changing any official doctrines.

He urged priests around the world to be more accepting of gay men and lesbians, divorced Catholics and other people living in what the church considers “irregular” situations.

“A pastor cannot feel that it is enough simply to apply moral laws … as if they were stones to throw at people’s lives,” Francis writes in a sweeping paper outlining his stance on family matters.

He urges more common sense and less unthinking following of rules. “By thinking that everything is black and white, we sometimes close off the way of grace and growth,” he writes.

He emphasizes that “unjust discrimination” against gay men and lesbians is unacceptable, downplays the idea of “living in sin,” and suggests that priests should use their own discretion on whether divorced Catholics in new marriages can take Communion.

On the topic of gay equality, Francis repeated words he has written and said before: same-sex unions are no in way “similar or even remotely analogous to God’s plan for marriage and family.” Yet for the pope who floored the planet when he said, of gay priests, “who am I to judge,” there may be others who still hold out hope, based on other comments Francis wrote in his document

After praising Christian marriage as being “fully realized in the union between a man and a woman…” he write that “Some forms of union radically contra­dict this ideal, while others realize it in at least a partial and analogous way. The Synod Fathers stated that the Church does not disregard the constructive elements in those situations which do not yet or no longer correspond to her teach­ing on marriage.”

There will undoubtedly be Catholics who see Francis as closing the door on gay equality forever while others will say he left it open a crack.