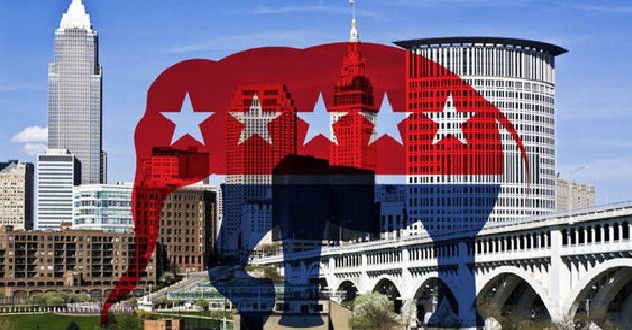 Politico: Republicans Are Gearing Up For Battle Over Convention Platform Position On Same-Sex Marriage

The local Republican Party in each state and territory selects two people to help craft the GOP’s official platform at the convention. Politico today reports that these 112 platform committee members are being lobbied by GOP moderates to write a more inclusive platform position on same-sex marriage, which was denounced in the 2012 platform with a call for a constitutional amendment that defines marriage as between one man and one woman.

Some of the party’s biggest financiers, attempting to transform the GOP’s approach, have been helping to bankroll the American Unity Fund, a group that has launched a well-organized, behind-the-scenes effort to lobby convention delegates who will draw up the platform. It is asking them to adopt language that would accommodate same sex marriage.

The organization, which has offices in Washington, D.C., and a growing army of volunteers spread out across the country, has the backing of billionaire investors Paul Singer, Dan Loeb, Seth Klarman and Cliff Asness, who have been outspoken in calling for the GOP to moderate its rigid stance on social issues.

American Unity Fund’s efforts are the most assertive yet to alter the party’s posture on gay marriage. During the Republican National Committee’s winter meeting in January, staffers with the group huddled with influential party officials over drinks at the posh Belmond hotel in Charleston, South Carolina. The organization is also planning to have a presence at the committee’s spring meeting this month in Hollywood Beach, Florida. Over the past week, the group has reached out to a number of RNC members by phone.

Helping to lead the charge to retain the anti-LGBT language is hate group leader and Ted Cruz supporter Tony Perkins, who was selected as one of Louisiana’s platform committee members last month. Unsurprisingly, also on the side of evil is Eagle Forum founder Phyllis Schlafly, who has endorsed Donald Trump. Politico notes that party platforms are typically crafted with the policy positions of the presumptive nominee in mind. This year, perhaps obviously, that tradition is out. (Tipped by JMG reader Dwight)