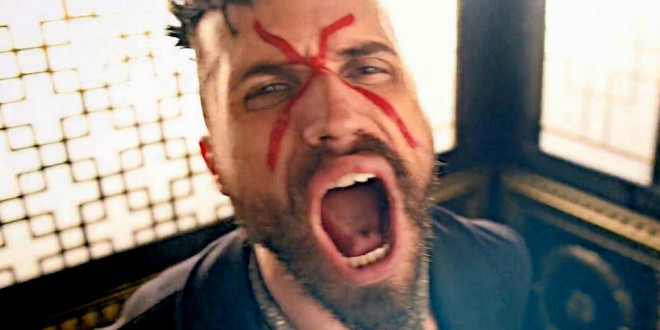 For Neon Trees’ Tyler Glenn, his solo debut is as political as it is personal. Two years after the singer came out to Rolling Stone and declared himself equally proud of being both gay and a practicing Mormon, his song “Trash” and its accompanying video clearly denounce the Church of Jesus Christ of Latter-day Saints’ restrictive, conservative view of same-sex relationships.

In the clip for the biting electro-pop track, Glenn is first seen drinking straight from a liquor bottle, though alcohol is forbidden by Mormonism. As he sings the song, the musician is surrounded by Mormon imagery, including altered portraits of the church’s founder, Joseph Smith. “One man’s trash is another man’s treasure,” he sings during the song’s chorus, which he tells Rolling Stone is meant to be a reflection of a “violent relationship.”

There’s much more at the link. In the second clip below, Glenn talks about growing up Mormon for the web series Mormon Stories.