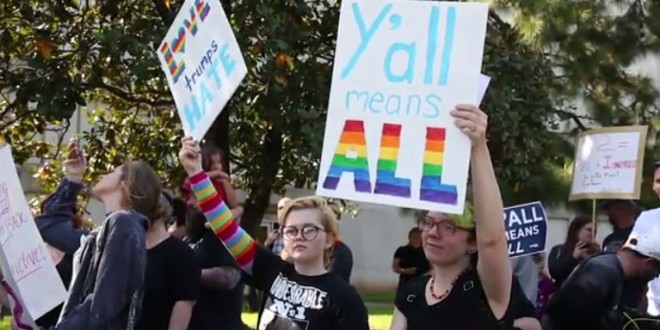 With signs that read “Y’all means all” and “Bigotry is a bad business model,” more than 200 people marched down Jones Street in Raleigh, N.C., and protested House Bill 2 across from the Executive Mansion on Saturday afternoon.

“Triangle Families against HB2” was a peaceful event that lasted about two hours. HB2 overturned an expanded Charlotte anti-discrimination ordinance and established statewide groups of people who are protected from discrimination. Gay, lesbian and transgender residents are not among those protected.

At the protest, dozens of children stood with their parents, dressed in rainbow colors and holding signs. Protesters sang songs such as “Let It Be” and another specifically written against HB2.

Motorists driving by honked in support. There were cries to vote out legislators who supported the new law and elect Attorney General Roy Cooper as governor. “Our legislators voted to legalize bigotry. They could have improved our schools or paid our teachers more or raised minimum wage, but they didn’t,” the protesters yelled in unison.