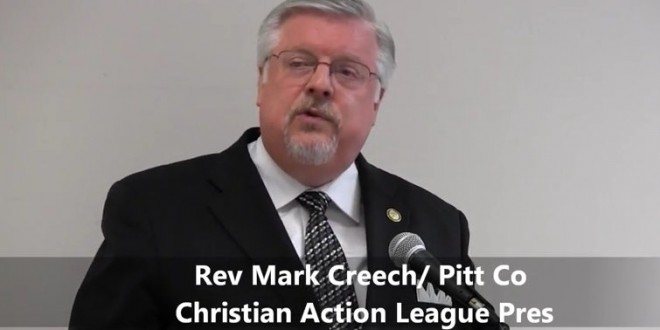 NORTH CAROLINA: Hate Groups Cancel HB2 Loyalty Oath After It Blows Up In Their Faces [VIDEO]

A coalition of religious groups that pressed the General Assembly to pass House Bill 2 last month quickly scrapped a plan Wednesday to have state lawmakers sign a pledge to support it. Rep. Darren Walker, D-Wake, said the pledge erases any doubts that House Bill 2 is discriminatory legislation.

“It says it right here and makes it very clear they want to be able to put signs up on businesses that say ‘No Gays Allowed,'” Jackson said. “I imagine these are the same type of things they had legislators in the ’50s and ’60s trying to get them to sign, saying they wouldn’t support (civil) rights. It’s no different. It’s just 50 years later.”

John Rustin, president of the North Carolina Family Policy Council, sent the pledge to all members of the House and the Senate. By mid-afternoon Wednesday, he had emailed lawmakers, saying the pledge was circulated “inadvertently” and should be ignored.

“We had considered providing a means, prior to the convening of the 2016 Legislative Session, by which we could continue to encourage North Carolina lawmakers to stay strong in your leadership defending the privacy and safety of all North Carolinians, and clarifying that there is no patchwork of confusing local laws in the state that are harmful to commerce, labor, and trade,” Rustin said in the email. “However, we decided not to move forward with this pledge and respectfully ask that you disregard yesterday’s e-mail.”

Don't believe HB 2 is all about discrimination? Check out last part of the pledge. #RepealHB2 pic.twitter.com/1Bdmlma0Qo