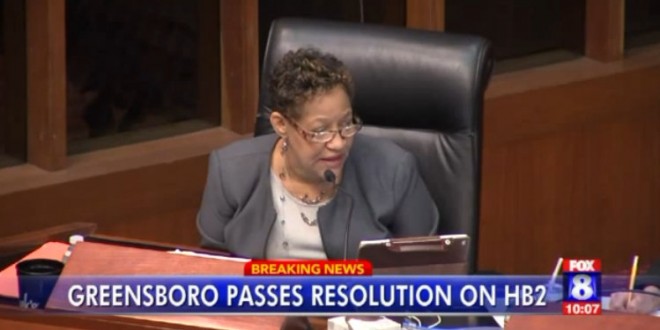 Greensboro was one of the North Carolina cities whose LGBT rights ordinance was overturned by HB 2. The lone dissenting vote last night came from the council’s only Republican. Of course. From Greensboro’s Fox affiliate:

City council members voted 8-1 Tuesday in favor of a resolution opposing House Bill 2. HB2, or the Public Facilities Privacy & Security Act, is a new state law which says transgender individuals must use the bathroom that corresponds with the sex listed on their birth certificate. Council members called the bill an “overreach” by the state.

“This is one of the worst discrimination bills that we’ve seen in a long time,” said city council member, Sharon Hightower. “It’s not really about bathrooms, that’s to throw us off track.” The new law also prevents city and county governments from passing anti-discrimination ordinances. Dozens of people attended the meeting, holding up signs that read “Say no to HB2.”

.@greensborocity has just passed resolution calling for NCGA to #RepealHB2 and passed 8-1. Thanks to them. pic.twitter.com/dXA5Ryiqdd