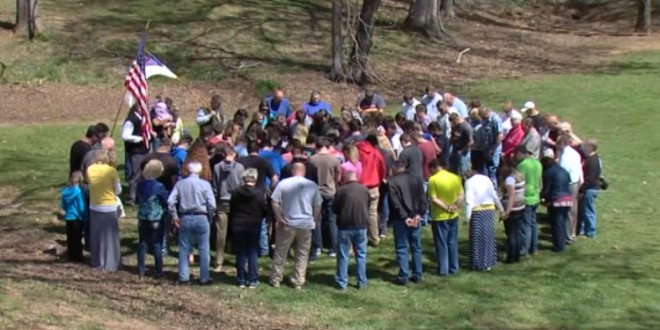 NORTH CAROLINA: At A Day Of Silence Walkout

GLSEN’s anti-bullying Day Of Silence was on Friday and Winston-Salem’s Fox affiliate reports on high school students that walked out in protest:

On a day where thousands of people nationwide stayed silent in support of the LGBT community, another group gathered outside a local school for a prayer vigil in response. About 100 people joined in, on the outskirts of the East Wilkes High School campus in Ronda, including students from the school.

“A gang of youth that walked out of class, walked out of school, to show their support and to show their love of their God,” said Curtis Ponder, pastor of the Maple Springs Baptist Church in Ronda. “If they can press up on the young people in our schools to be quiet and be silenced for a whole day of school, surely to God, we as God’s people can lift up our voices to an almighty God.”

The discussion and prayer continued for about 15 minutes, with Ponder saying that was the amount of time allotted to the students by East Wilkes Principal Jodi Weatherman. “My heart and my intentions of being here today is not controversial, it’s not a show of anything mean, anything lewd,” Ponder said.

Previous Phil Bryant: Who Cares About 80s Rockers? [VIDEO]
Next NORTH CAROLINA: Hate Groups Cancel HB2 Loyalty Oath After It Blows Up In Their Faces [VIDEO]