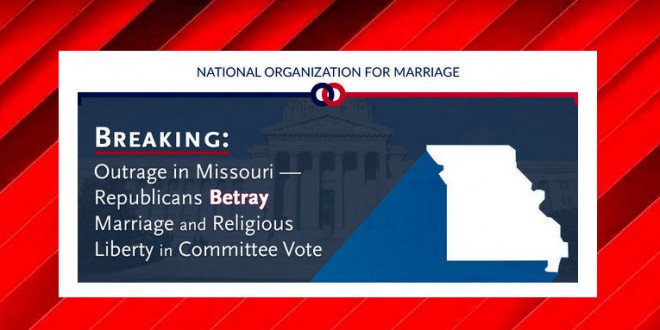 NOM has the sadz about yesterday’s result in Missouri. From Brian Brown:

We’ve been done in by three cowardly Republican legislators who voted with LGBT extremists to deny supporters of marriage protections from government persecution. Because of these gutless Republicans who have betrayed Missouri values and the GOP platform, supporters of marriage will continue to be targeted by extremists for punishment whenever someone does not wish to be personally involved in ‘celebrating’ a same-sex ‘marriage.’ Pastors, churches, schools, nonprofit groups, individuals and small businesses will be victimized as a result.

Please sign our petition letting the Republicans who betrayed us know that their actions will not be tolerated. These Republicans have denied the people of Missouri the right to vote on this important issue. They sided with the extremists who do not even want voters to have a say about whether government should target individuals, churches, charities and small businesses for refusing to participate in gay ‘marriage,’ something that many people of faith consider to be sinful.

I can promise you this — NOM is not going to take this betrayal lightly. Just as we did in New York state when gay ‘marriage’ passed in the legislature because of Republican votes, we will work tirelessly to defeat those Republicans responsible for the defeat of SJR 39 in Missouri. Aren’t you sick and tired of politicians running for office as conservatives but then failing to support conservative policies? Please sign our petition to these three gutless Republicans calling them out for their betrayal.

Every single one of the Republican legislators we targeted in New York have had their careers ended. They’ve been forced to resign or been thrown out of office. We will do everything within our power to ensure these three Republicans in Missouri meet with a similar fate.

FACT CHECK: As I noted multiple times back in 2012, Brian Brown is lying about those GOP New York Senators.

In other words, those Missouri lawmakers have little to worry about.