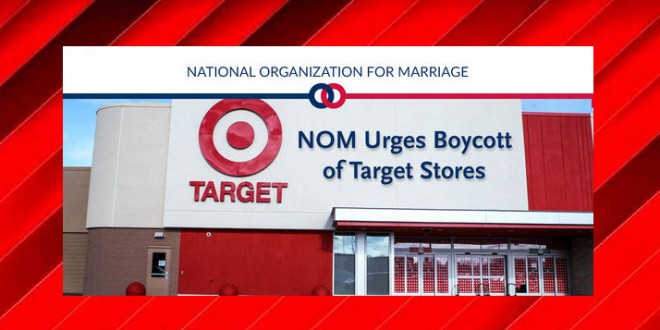 At this writing the American Family Association’s petition to boycott Target has swelled to 750,000 names, making it by far the largest response we’ve seen for a hate group petition. Jealously watching from the sidelines is fellow hater Brian Brown, whose own boycott petitions against Starbucks and General Mills were laughable failures. But Brown isn’t about to miss an opportunity to exploit the issue to grow NOM’s email money beg list. He writes:

Target has made billions of dollars selling merchandise to American families and yet for several years has been disrespecting traditional family values with an increasingly militant push in support of the agenda advanced by LGBT extremists.

First they urged that our nation’s marriage laws be rewritten by activist judges in violation of the votes of over fifty million Americans and countless legislators across this country who had acted to define marriage in the law the way it exists in reality — as the union of one man and one woman.

Now they have signed onto the dangerous push to allow men into intimate facilities reserved for girls and women. Worse, they are attacking states like North Carolina for enacting legislation that protects girls and women against unwanted exposure from biological males.

It’s high time that the so-called silent majority in America tell corporate behemoths like Target to stop disrespecting our families and our values. Send Target a message by signing our petition to boycott Target and pledge to refuse to shop at their stores.

We’re grateful to our friends at the American Family Association and other allies who began the boycott Target campaign, and we’re proud to add our own voice to this growing movement. Please sign our petition pledging to boycott Target and use the social media buttons below to share the petition with everyone you know.

Corporate giants like Target should be focused on providing value to their customers, not remaking American values in the image of LGBT extremists. Join us in boycotting Target and sign our petition today.

Previous Gov. Pat McCrory: Democrats & Gays Orchestrated The Bathroom Issue So That I Won’t Be Reelected
Next Donald Trump: Celebrities Who Say They’ll Move To Canada Only Make Me Work Harder To Win [VIDEO]