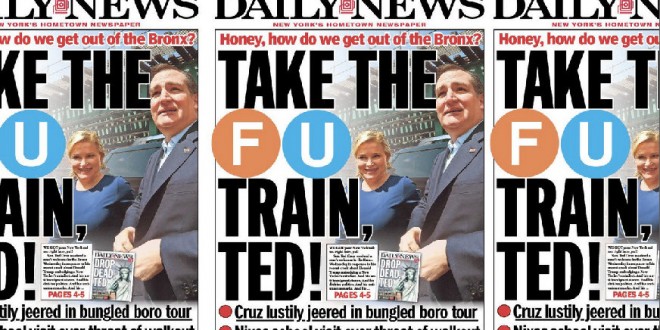 Value this. Ted Cruz got the Bronx cheer Wednesday from angry New Yorkers upset over the Republican presidential candidate’s callous “New York values” crack and his harsh stance on immigration. Cruz was crucified during a stop in the Bronx, where residents and elected leaders derided him for insulting the city and the borough, only to come crawling back begging for money and votes.

“Just because he has a Hispanic last name does not mean he’s Hispanic,” said hairstylist Edna Ferrer, 57, who was chastising Cruz supporters outside a campaign event in the Bronx. “His mind is white.” Moments earlier, the Cruz campaign took a page out of rival Donald Trump’s book, removing one demonstrator from the event when the criticism got too loud.

The heckler got the heave-ho from Sabrosura restaurant on Westchester Ave. in the Soundview section after shouting that Cruz had no business in the Bronx. “You’re running on an anti-immigrant platform, and you’re speaking in the Bronx,” Rodrigo Venegas told Cruz. “You should not be here.” Venegas was cheered like a Yankee slugger by fellow protesters after Republican Party staffers removed him from the restaurant.