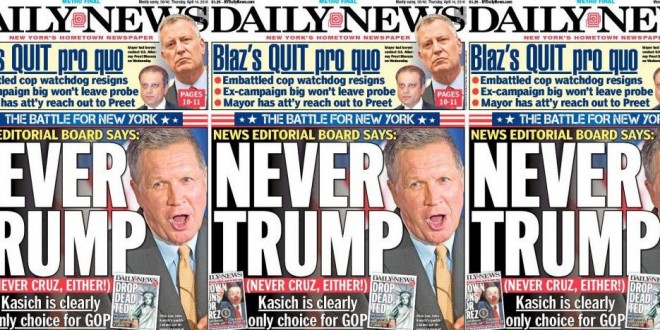 Yesterday they endorsed Hillary. From their editorial:

New York’s 2.7 million registered Republican voters can break the fever that torments their party by voting for principled, pragmatic conservatism in the April 19 presidential primary.

By his record of accomplishment in public life, by the credibility of his plans, by a temperament that marries a small government outlook with can-do effectiveness, Ohio Gov. John Kasich is highly suited to carry the GOP banner into the general election.

Kasich’s qualifications are all the clearer — screamingly so — when matched against those of competitors Donald Trump and Ted Cruz.

In fact, both men would be disastrous as President — Cruz because he is an absolutist ideologue, Trump because he suffers from the irreparable, disqualifying defect of being Trump.

As a mature, grounded politician, Kasich competes well against them both. Although he was largely overtalked in debates that were staged like gladiatorial contests, Kasich has nonetheless drawn the favorable attention of voters across the country. He alone runs ahead of Clinton in polls and is neck and neck with Sanders.