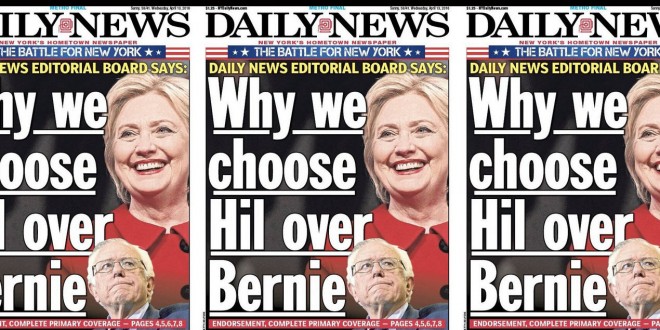 On April 19, New York Democrats will have unusual say over the party’s nominee. They have in Clinton a superprepared warrior realist. They have in opponent Bernie Sanders a fantasist who’s at passionate war with reality. By choosing Clinton, Empire State Dems would powerfully signal that the party has gotten real about achieving long-sought goals.

Clinton is unsparingly clear-eyed about what’s wrong with America while holding firm to what’s right with America.

She fully understands the toll that adverse economic forces have taken on the country.

She is supremely knowledgeable about the powers a President can wield to lift fortunes in need of lifting.

She possesses the strength and the shrewdness to confront the tough politics of advancing an ambitious Democratic agenda in the White House.

Still more, she is a cauldron-tested globalist who had the spine to give Obama a thumb’s up for taking out Osama Bin Laden and who is far the wiser about the use of American power, having served as secretary of state and seen the consequences of the war in Iraq.

These truths about America’s most well-known public figure are long past debating among Democrats, above all in New York, the state Clinton represented in the U.S. Senate.