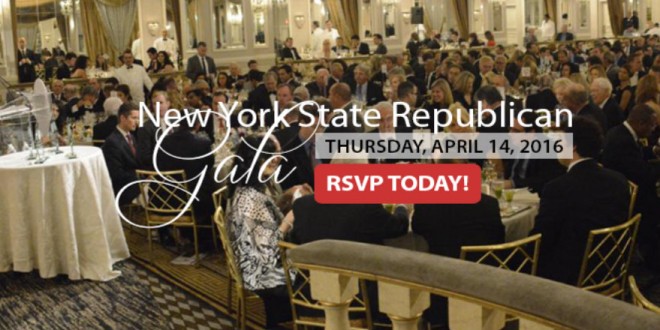 Organizers planning an anti-Donald Trump protest in New York City next week expect thousands of people to show up when the GOP presidential frontrunner speaks at the New York State GOP Gala on Trump’s home turf of Manhattan, Breitbart News has learned.

The protesters have set up a Facebook Event page “Protest Donald Trump at the NY State Republican Gala.” According to the page, organizers anticipate thousands will attend the protest of Donald Trump’s appearance at the Republican Gala at the Grand Hyatt in New York City on April 14th. Ohio Gov. John Kasich and Sen. Ted Cruz are also attending.

”This year has become one of the most exciting and vital presidential elections in many years,” New York GOP chairman Ed Cox said in a statement about the Gala. “New York Republicans are more motivated than ever to take back the White House, and for the first time in a long time, will play a decisive role by their votes in the April 19 presidential primary.“

We have listened for long enough. Now it is time to come together against hate. It is time to stand on the shoulders of those who built our city, and come together as New Yorkers and say, “Mr. Trump – you do not speak for us; you do not represent us and we will not let your bigotry, xenophobia, misogyny, racism and hatred go unanswered anymore.”

Since June, we have listened to Donald Trump attack women, Mexicans, Muslims, the disabled, and anyone who didnt support Making America Hate Again. We have listened to Mr. Trump encourage his supporters to “knock the hell” out of protestors offering to pay their legal fees and suggest that he’d like to “punch (a protestor) in the face.”

We have listened to him disparage his fellow republican candidates, denigrate the democratic candidates, belittle the press and deprecate all who disagree with him. On this day we will come together, and say no to his thirst for hatred, and violence.

Earlier week Politico noted Trump’s history with the Grand Hyatt and Roy Cohn’s role in getting it built:

Trump was in the thick of trying to make the first major move of his business career—the ambitious refurbishment of the crumbling Commodore hotel in the then-down-and-out area around Grand Central station. Trump wanted to turn it into a lavish Grand Hyatt, and did. The only way he was able to do it, though, was an unprecedented 40-year, $400-million tax abatement from the city. And the only way he got it was Cohn. Cohn had been tagged as “a legal executioner” in a 1978 piece in Esquire.

The meticulously reported and roundly unflattering profile prompted Cohn to call the writer, Ken Auletta, who was amazed to hear Cohn ask if he could buy 100 copies. “One of the most reptilian characters I’ve ever met,” Auletta told me. For the Hyatt deal, Cohn called upon his deep relationships with the mayor, Abe Beame, and one city hall staffer, Stanley Friedman, who practically singlehandedly pushed through the last approvals and then promptly went to work for Cohn’s law firm.