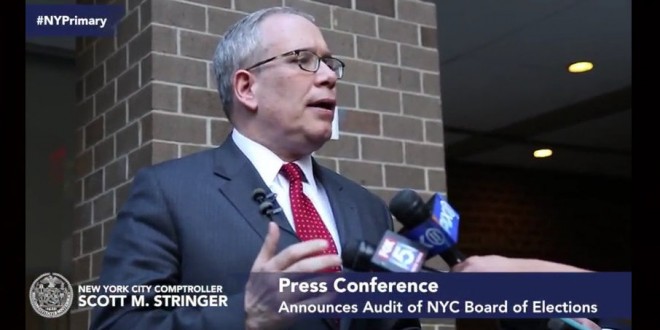 A record-setting deluge of Primary Day voter complaints led Tuesday to the angry promise of a full-scale investigation into the city’s long-bumbling Board of Elections. The flood of gripes, running the gamut from locked doors to botched voter rolls, led irate city Controller Scott Stringer to announce an immediate probe of an incompetent agency.

“Unfortunately in New York City, this is nothing new,” Stringer told a news conference some 10 hours after the polls opened — or didn’t — at 6 a.m. “The next president of the United States could very easily be decided tonight. And yet the incompetence of the Board of Elections puts a cloud over these results. It’s time we clean up this mess.”

Presidential primary voters in the five boroughs ran an obstacle course of ineptitude to cast their ballots: Broken machines, shuttered precincts and purged voter rolls. The most complaints came from Brooklyn, where entire sections of poll books listing the names of eligible voters were reported missing, according to state Attorney General Eric Schneiderman.

The problems started when early-bird voters in Queens and Brooklyn arrived at sunrise — only to find themselves unable to vote. Mayor de Blasio issued a statement charging that entire buildings and city blocks of voters were among the 126,000 voters purged from the Brooklyn books since last fall.

“These errors indicate that additional major reforms will be needed to the Board of Election,” said de Blasio. “The perception that numerous voters may have been disenfranchised undermines the integrity of the entire electoral process, and must be fixed.” The purged Brooklynites included 12,000 who moved out, 44,000 shifted to inactive voting status, and a stunning 70,000 removed entirely from the books.