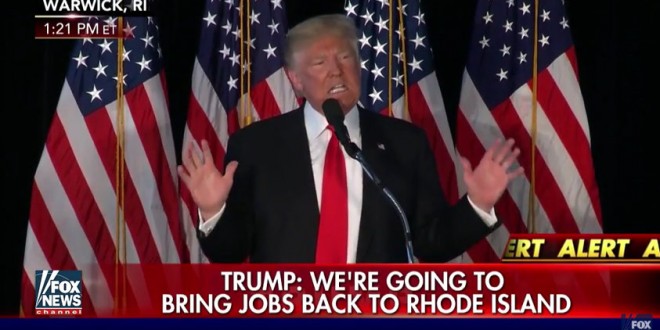 New Mature Trump On John Kasich: I’ve Never Seen A Human Being Eat In Such A Disgusting Fashion [VIDEO]

Donald Trump relentlessly mocked Ohio Gov. John Kasich’s campaign-trail eating habits on Monday. During a rally in Rhode Island, the Republican presidential frontrunner said that the Ohio governor should learn from Trump’s children, whom Trump has urged to eat modest portions of food.

“Did you see him? He has a news conference all the time when he’s eating. I have never seen a human being eat in such a disgusting fashion,” Trump said of Kasich. He continued: “I’d say, ‘Children, small, little bites.’ This guy takes a pancake and he’s shoving it in his mouth. It’s disgusting. Do you want this guy for your president?”

Previous CALIFORNIA: American Family Association Runs Full-Page Ad In PayPal’s Hometown Newspaper
Next Cleveland Cops To Family Of Tamir Rice: Use That $6M Settlement To Teach Kids How Not To Get Shot By Us