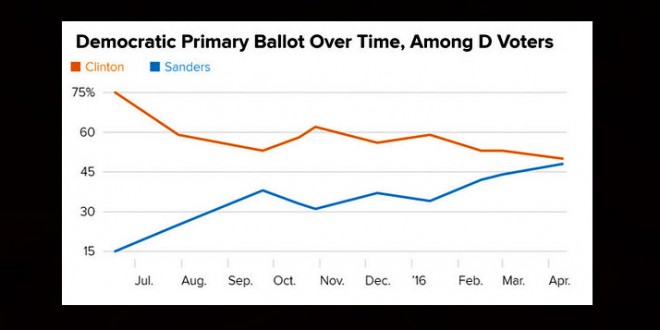 Hillary Clinton leads Bernie Sanders nationally by just two points in the Democratic presidential race, according to results from a brand-new NBC News/Wall Street Journal poll. Clinton gets support from 50 percent of Democratic primary voters, while Sanders gets support from 48 percent. That’s down from Clinton’s nine-point advantage a month ago, 53 percent to 44 percent.

The national poll, however, comes as Clinton is viewed as the favorite in Tuesday’s Democratic primary in New York — and as Clinton leads Sanders in the delegate race and in popular votes. Indeed, more than half of the country has already voted in Democratic and Republican primary races. In the current NBC/WSJ poll, Clinton leads Sanders by 15 points among women (57 percent to 42 percent), though that’s down from her 20-point-plus edge earlier this year

Previous POSTED: My Fifth Column For Pride Life
Next TRAILER: The Birth Of A Nation