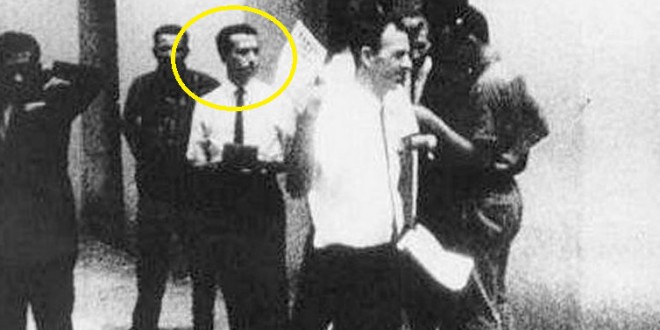 The National Enquirer has published what it says is conclusive evidence that Ted Cruz’s father, Rafael B. Cruz, is the man photographed next to JFK assassin Lee Harvey Oswald distributing pro-Castro leaflets in 1963 in New Orleans.

The Cruz presidential campaign fired back unequivocally. “This is another garbage story in a tabloid full of garbage,” communications director Alice Stewart told McClatchy. “The story is false; that is not Rafael in the picture.”

The explosive suggestion that Cruz’s father would have had any affiliation with Oswald is not corroborated in any other way. Cuban-born Rafael Cruz is now a fervent anti-communist, but there was a time he supported then-rebel leader Fidel Castro. His son, Sen. Ted Cruz, R-Texas, frequently relates his father’s arrest and torture by government officials and subsequent escape to the United States.

The elder Cruz ended up at the University of Texas at Austin and still supported Castro, who led the revolution that overthrew the Batista regime in 1959. Castro formally declared himself Marxist in 1961. There are photos of Rafael Cruz participating in a pro-Castro rally in 1959 and an article in the student newspaper where he describes his support for Castro. And one report questions the extent of the elder Cruz’s connections to Castro before fleeing Cuba.

The photos of Oswald distributing pro-Castro literature are from August 1963, just a few months before the JFK assassination in Dallas, which the Warren Commission Report on the Assassination of President John F. Kennedy said was carried out by Oswald.

The owner of the National Enquirer has endorsed Donald Trump. The tabloid’s recent claim that Ted Cruz has had affairs with at least five women went nowhere. In the glasses below is Rafael Cruz at a 1959 pro-Castro rally at the University of Texas. Previous Funny Or Die: Ted Cruz Is A Poo-Poo Head [VIDEO]
Next 90 Year-Old Former US Sen. Harris Wofford Reveals That He’s About To Marry A 40 Year-Old Man