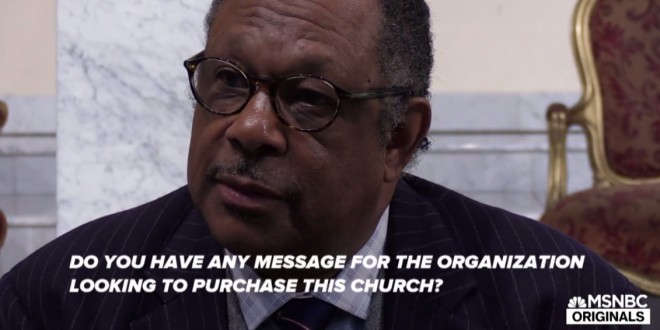 MSNBC today published the below video report on Harlem’s bankrupt hate church, which will back on court on April 21st when a new auction date might be set. Interviewed for the piece was Ali Forney Center founder Carl Siciliano, who tells us that he’ll be at the hearing with his attorneys.

Ali Forney Center has raised $330,000 towards a down payment on the property, with a large portion of that amount coming from the JMG community.

Last week hate Pastor James David Manning appeared resigned to losing his church in a video posted to his YouTube channel, but he was once again defiant when speaking to MSNBC.

Previous Glenn Beck: Cruz Told Me He Berated His Staff For Booking Speech At “Death To Gays” Rally [VIDEO]
Next JMG EXCLUSIVE: Cyndi Lauper To Donate All Profits From Raleigh Concert To Equality North Carolina