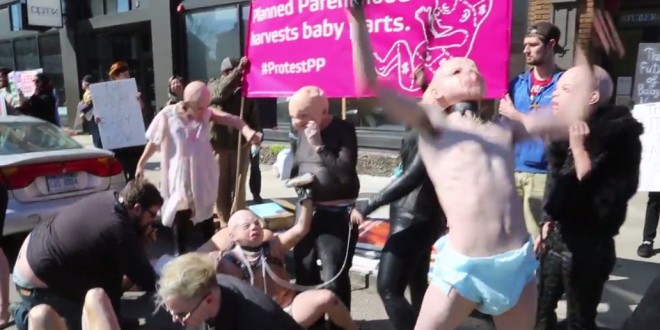 Most Bizarre Counter-Protest Ever? [VIDEO]

The Satanic Temple describes the clip below:

In response to a nationwide Planned Parenthood protest on April 23, 2016 members of The Satanic Temple of Detroit crashed the event dressed in bondage fetish wear, baby masks and diapers and engaged in group flagellation. The performers were then painted gold by adoring fetal idolizers. The action was intended to expose fetal idolatry and the perpetuation of fictional, coercive propaganda against the reproductive health organization.

The Satanic Temple (TST) believes that the anti-choice movement’s obsession with and mischaracterization of the fetus obscures medical reality and a woman’s constitutional right to choice. Enlarged images of fetuses no larger than an inch and the personalization of mindless, senseless human embryos elevates the fetus to the status of a demigod. The strategy of elevating tiny human em­br­yos and fetuses to a rever­ence creates a fantasy in which the maternal body is both erased and criminalized.