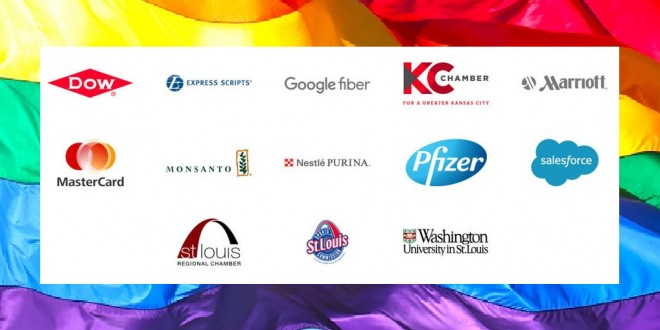 Businesses from around Missouri announced the formation a coalition Tuesday designed to stop a “religious freedom” amendment to the state’s constitution currently making its way through the Missouri Legislature.

Members of the coalition, called Missouri Competes, have agreed to sign a pledge stating that the proposed amendment “does not represent our values as Missourians, and the measure will damage our state’s reputation as a welcoming home and travel destination for job creators, their employees, families and customers.”

The legislation in question — known as Senate Joint Resolution 39, or SJR39 — would ask voters to amend Missouri’s Constitution to protect certain individuals and businesses who cite religious beliefs to refuse service to same-sex couples.

Proponents are pushing the measure in response to last year’s U.S. Supreme Court ruling legalizing same-sex marriage nationwide. They contend the amendment is needed to prevent those with sincerely held religious beliefs from being punished by government.

The business community has led the charge against the amendment. Several companies involved in Missouri Competes – such as MasterCard and Monsanto – have already spoken out publicly against Missouri’s proposed amendment.

Others, including Google Fiber and Pfizer, are new to the campaign. They are joined by a variety of business, large and small, who believe the legislation enshrines discrimination in the state constitution.

View the full and impressive list of coalition members at Missouri Competes.