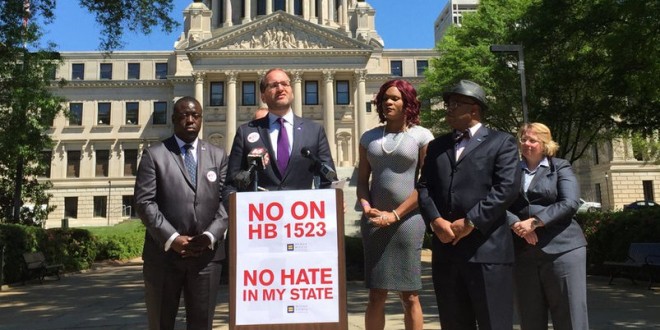 UPDATE: A live video link for the Mississippi House is below. Via press release from the Human Rights Campaign:

This morning, advocates from HRC and ACLU of Mississippi gathered outside the Mississippi State Capitol to highlight the discriminatory effects of H.B.1523, urging House Speaker Philip A. Gunn to shelve the bill before this afternoon’s final vote. The outrageous legislation would allow individuals, religious organizations and private associations to use religion to discriminate against LGBT Mississippians in some of the most important aspects of their lives, including at work, at schools, in their family life and more.

Following the House’s expected vote this afternoon, advocates for HRC, the ACLU of Mississippi, Planned Parenthood Southeast, the Southern Poverty Law Center and more, will hold a rally with supporters across the state outside the governor’s mansion at 5:30pm CT, to call on Governor Bryant to veto the hateful legislation.

“H.B. 1523 is a vicious, unacceptable attack on fairness, equality and the rights of LGBT people,” said HRC President Chad Griffin. “Fair-minded Mississippians and the business community roundly condemn this legislation, and implore Governor Bryant and legislative leaders to stand on the right side of history. and follow the example of Georgia Governor Nathan and South Dakota Governor Dennis Daugaard, who vetoed similar anti-LGBT legislation. The people of Mississippi deserve better, and we remain committed to fighting until every Mississippian can live openly and authentically at home, at work and in their community.”

The Mississippi House live-stream is here and should commence shortly.

Praying that the Mississippi House and Governor @PhilBryantMS will stand strong for religious freedom & conscience and vote YES on HB 1523.

UPDATE: The Democrats’ motion to reconsider was rejected by a 70-47 vote. It now goes to the desk of Gov. Phil Bryant, who has not yet said what he will do. But we’re not holding our breath.