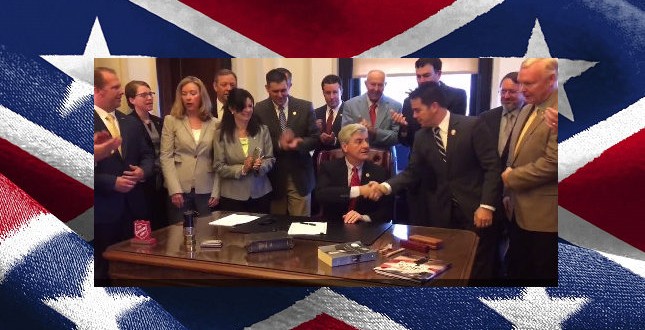 Praise the lord and pass the ammunition. Literally. From the Jackson Clarion-Ledger:

Gov. Phil Bryant has signed into law the Mississippi Church Protection Act to allow churches to legally have armed security if they choose. Bryant said in a Twitter post he signed the bill because “churches deserve protection from those who would harm worshippers.”

State Rep. Andy Gipson, who authored the bill and is a ministe, has said. “I wish we lived in a world where this bill wouldn’t be necessary.”

During debate in the House, state Rep. John Hines, D-Greenville, said the bill isn’t needed. He said it has the potential to create more of a problem, asking rhetorically what would happen if a child took a toy gun to church and a security person mistook it for a weapon and hurt the child?

The Mississippi Police Chiefs Association has express concerns about the bill, saying it will do away with a license to carry a concealed handgun in public and would put law enforcement and all Mississippians in harm’s way.

The Police Chiefs Association says the bill would lower the bar for who can carry a concealed, loaded gun in public to include violent criminals, some severely mentally ill people, and chronic alcoholics.

Churches deserve protection from those who would harm worshippers. That’s why I signed HB 786. pic.twitter.com/WOxMAprXAc