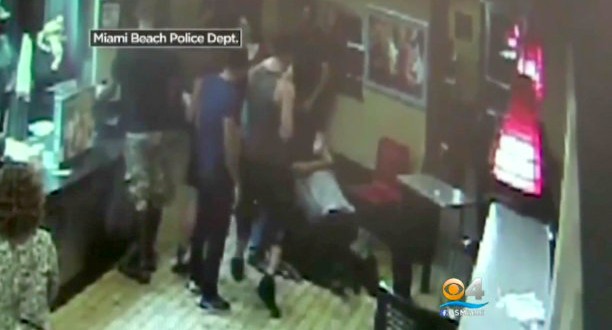 Video below. From Miami’s CBS affiliate:

Police are looking for at least one man, and possibly up to three, involved in the violent attack of a gay couple at a Miami Beach restaurant. A Miami Beach police officer was standing in front of the police station when he noticed something going down right across the street. It turns out 25-year-old Jordan Schaeffer, who was recently visiting Miami Beach from Los Angeles, had been attacked by a man inside the Whopper Bar at 1101 Washington Avenue at about 3 a.m. Monday.

Miami Beach Police said the confrontation happened after Schaeffer and his partner, 25-year-old Eric Danko, engaged in a display of affection. The couple told police their kiss offended a man in a dark shirt and shorts, who confronted them and harassed them “using derogatory words.” “The subjects in this case happen to be gay individuals and that’s part of our investigation to see what provoked that attack,” explained Miami Beach police officer Ernesto Rodriguez. That led to things getting physical and within moments, the men were wrestling on the restaurant floor.

“Had some sort of exchange with victims, a verbal exchange which escalated into a violent physical attack,” Rodriguez said. Nearly a minute into the brawl, a second man in a light, long-sleeve shirt and jeans can be seen in the video keeping people from breaking up the fight. He also pushed away Schaeffer’s boyfriend who was wearing a gray tank top.

Police say the main attacker appears to be trained in the martial arts. The assault is being pursued as a felony battery. The victims believe it should be considered a hate crime. Florida does include sexual orientation among its hate crime laws. (But not gender identity.)

A fight involving two people at a Miami Beach fast food restaurant may have been fueled by hate, said police. According to officials, two men were inside a Burger King Whopper Bar on Miami Beach when suddenly an attacker slammed one of them to the ground.

Police said the victim followed the attackers onto Washington Avenue, but the suspects got away. “Once we have the subjects in custody, and we present the case to the state attorney,” said Rodriguez, “we can determine at that point if they will add the hate crime element to this case, which would heighten the penalties.”

The couple has since returned home to California. The police department said an attack, especially one which may be based on sexual orientation, has no place on Miami Beach. “We want a clear message that we want any visitor, any resident here on Miami Beach, or I mean, Dade County for that matter as a whole, everyone is welcomed here and there’s no place for hate,” said Rodriguez.

Previous Longtime Writer For The Simpsons: I Finally Outed Waylon Smithers As A Show Of Love For My Gay Son
Next MISSISSIPPI: Hate Bill Lands On Governor’s Desk