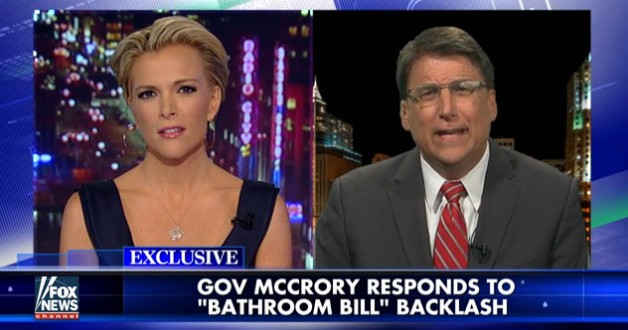 “I can’t believe we’re even talking about this,” McCrory said, before blaming “the left” for the passage of HB2 by the Republican-dominated state legislature. The law rolled back anti-discrimination statues implemented in Charlotte, and bans trans residents from using public restrooms according to their gender identity.

“It’s not just womens’ bathrooms, it’s mens’ bathrooms,” he continued. “In fact, the Obama administration is now putting requires on federal money given to states that they also have to have this gender identification requirement for schools.”

“If you could get back to my question, though,” Kelly interjected, before noting the negative stereotypes characterizing transgender men and women as molesters.

“They’re not. That’s not true,” she said. “Typically male molesters are heterosexual, and if they want to sneak into a bathroom they’ll do it. But 90 percent of the cases, molestation happens with someone you know. So what is the fear with the transgender situation in the bathrooms?”