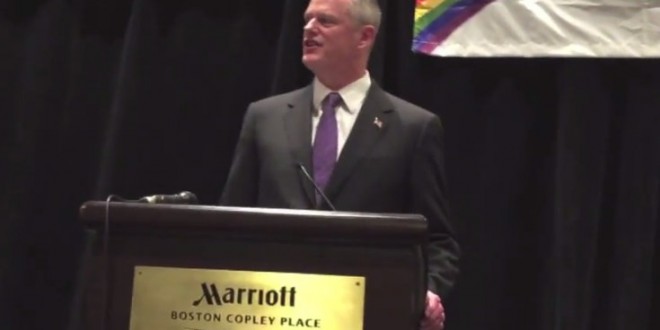 Governor Charlie Baker’s speech to LGBT executives and activists Wednesday night was met with a cascade of boos after he refused to voice support for a bill to prevent bias against transgender people in public spaces.

Baker’s reluctance to take a stand on the bill prompted many in the crowd at the Marriott hotel to boo and loudly chant “sign the bill!” before he walked off stage about 20 minutes into his highly anticipated remarks. The event’s organizers had said Baker would mingle with the crowd after his speech, but he left without meeting with the attendees.

More than 1,000 business leaders packed the hotel ballroom for the 10th Annual Boston Spirit LGBT Executive Networking Night, hosted by Boston Spirit magazine, in the hopes of hearing Baker either declare support for the transgender bill or at least pledge not to veto the measure if it reaches his desk.

But Baker infuriated many in the crowd, some of whom held signs that read “Trans Rights Now,” when he hedged. Baker said he would “make sure I talk to all the parties involved” if the legislation comes to him. He also did not say whether he would veto the bill.