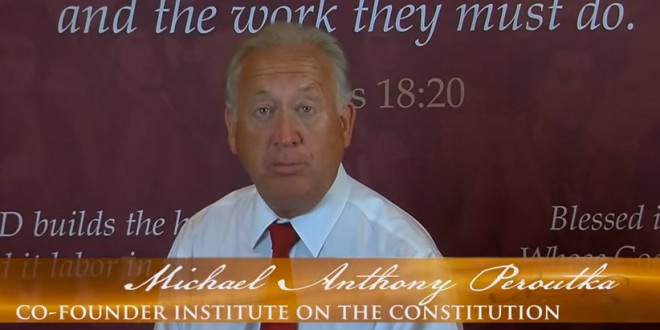 The alleged election law violations stem from a robocall that went to about 5,000 Anne Arundel County residents the weekend before the 2014 election, congratulating Democratic County Council candidate Patrick Armstrong “for his bravery in coming out of the closet” and linking him to a controversial measure that banned discrimination against transgender people in public areas, including restrooms.

The recording gave the home phone number of Armstrong’s mother and invited residents to call about Armstrong’s support of “the bathroom bill.” Many did. Prosecutors said the call lacked the appropriate identification and came from what they described as “an untraceable” prepaid cell phone purchased with cash by Waters and Fusaro at Walmart in Fredericksburg, Va.

Fusaro was the campaign manager of Armstrong’s opponent, Republican Councilman Michael Anthony Peroutka, a former member of the neo-Confederate group League of the South.

You may recall that the League Of The South recently celebrated the 150th anniversary of the assassination of “tyrant” Abraham Lincoln and provided the signage for anti-gay marriage rallies in Alabama. Peroutka was also the largest financial backer of Alabama Supreme Court Chief Justice Roy Moore’s successful campaign to be returned to the bench.

VIDEO: Peroutka declares that all Maryland laws are invalid because Jesus. Or something.