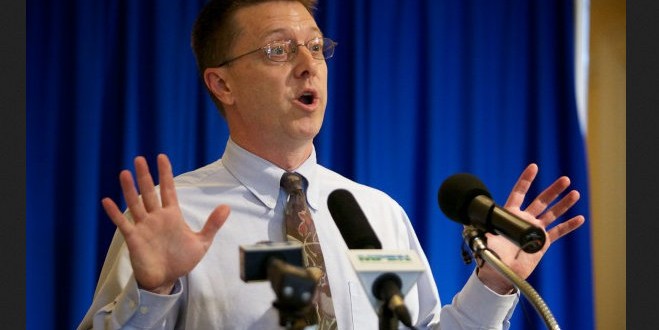 From the Bangor Daily News:

Voters in Maine could be asked to remove protections from discrimination based on sexual orientation from the Maine Human Rights Act if a new ballot initiative is successful.

Michael Heath of Chelsea, former head of the Christian Civic League of Maine and longtime opponent of protections based on sexual orientation or identity, has filed paperwork with the secretary of state’s office to launch a petition drive to force the question to a statewide referendum.

Secretary of State Matthew Dunlap said Tuesday that the language for the petition has been approved and that all Heath has left to do is pick up paperwork and receive instructions regarding how to collect petitions.

Heath filed the application in June 2015, according to records provided by Dunlap’s office. Heath’s proposal would remove the words “sexual orientation” from the Maine Human Rights Act in numerous places where the act discusses protections for Mainers.

Discrimination based on sexual orientation has been part of the act since 2005, when Maine voters rejected a people’s veto attempt to prevent the inclusion of sexual orientation as a protected class. In 2012, Maine became the first state to approve same-sex marriage via statewide referendum.

We last heard from Heath when he announced that leftists are planning to “export sodomy” to all the planets in the universe.

“We find that the virus is spreading rapidly. It won’t be enough to pervert the whole world with this evil anti-family worldview. Since the developed governments of the world aspire to colonizing planets we have to prepare for the export of sodomy to other worlds — to the entire universe!

“I think it’s time for us Christians to flip open our communicators. Beam me up Scotty. It’s like Satan, a rabid dog, sunk his fangs deep into the donkey flesh of our nation’s government.

“And now the deranged ass is infecting other nations. What can be done? Humans die from rabies unless they are given the vaccine before the symptoms appear. Paul the apostle points out in his letter to Roman Christians that you can tell when a nation has become a walking corpse when it has endorsed perverted sex. Is it too late for America to take the vaccine?”